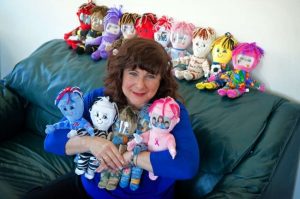 When Audrey Storch was diagnosed with breast cancer in 1995, her sons Adam and Jesse were only 7 and 4. The separation anxiety during her illness and treatments were particularly bad for Jesse.

Storch gave him a photo of her and her husband to take to bed with him, but one night while he slept the photo not only got ruined but cut his lip. She knew there had to be a better way.

Jesse’s anxiety didn’t end when Storch was deemed cancer-free. One day Storch made a doll by hand that could have a picture tucked into it.

“I wanted to make a huggable frame,” Storch said, who recently moved from Wayne to North Caldwell but still has her Passaic warehouse. “It helped him. He never wanted to sleep alone.”

With the support of her husband, Michael, they decided to make it a business. This was a world before Google. Storch made 367 phone calls as she researched and tried to launch the product.

In 1999, she launched the Huggee Miss You dolls with a portion of the profits going to breast cancer research and programs.

She said she faced sexism that fueled her even more to succeed.

“They didn’t take me seriously,” Storch said. “I used that to my advantage.”

She often followed a different business model than others — going left when everyone else went right, as she put it.

“That’s what always saved me,” said Storch, who admits she made mistakes but always learned and moved on, knowing when to find a new solution.

The Huggee Miss You line now has more than dolls in different patterns, including recordable dolls that repeat a message. They are chemical-free and safe from newborns up.

Storch has dealt with the successes and disappointment of owning a business world but said when she is at her lowest, she is always lifted by a timely call or an email — Thank you, the doll helped so much, customers will say then relay their story — “I just lost my grandmother” or “The divorce has been so hard” or “My child hadn’t slept since my husband was deployed until we got your doll” — reminding Storch why she created the doll and launched the company in the first place.

COMPANY/PRODUCT: Huggs To Go/Huggee Miss You dolls with place for photo in the face